Just off the popular St. Paul’s Square in The Jewellery Quarter, Anderson’s Bar and Grill is in my opinion, the best steakhouse in town.  Some people seem to take exception to the fact that on entrance you immediately have to walk downstairs, but I like that it’s subterranean, it adds character to the place.  In the summer it’s cool, in the winter it’s cosy, and you can pass several hours drinking and eating without a care for the goings-on above.  Simon the manager is a sincere epicure, and this sincerity shines through with the dishes presented.  He’s very knowledgeable about the produce and I suspect he knew several of the beasts by name. 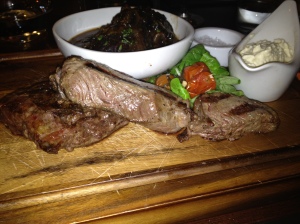 To whet the appetite I always have the breads here as they arrive warm and with lush baked garlic bulbs to spread over it – surely that has to be virtually healthy?  The pork belly starter is superb, as are the mussels, and the steak tartare for the adventurous is (I’m told) delicious.  Unusually, there is a good selection of wine by the glass, I like being able to have a glass of white with my mussels starter if my dining companions are drinking red, or vice versa.  We had a mushroom soup as a starter the last time we dined there and I remarked that it was almost as good as my own, a rare compliment!

Now I’m a bit rubbish when it comes to steakhouses as I rarely really fancy steak.  There are plenty of non-steak options and there is a daily specials menu.  I’ve eaten Sea Bream, Sea Bass, and fantastic Lemon Sole here, so don’t let the steakhouse title put you off if 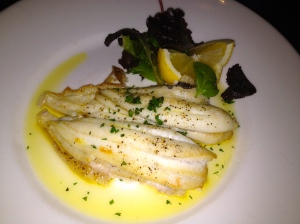 you’re not in to that kind of thing.  I have however had brilliant dishes of steak, including a surf and turf, and recently “Back to Front” which included a 4oz Rump, a 4oz Hanger, and braised Ox cheeks.  This is a great dish if you’re just getting in to your steaks and want to find out what you like, or if you have an iron deficiency!  The Ox cheeks were strongly beefy and melted in the mouth, and the other cuts were equally as tasty.  I hadn’t had Hanger steak before but the staff are always on hand to give advice as to what’s what.  The sides are plentiful and the chips are fantastic, possibly the best in Birmingham (although that’s a highly coveted title and one of my other favourite venues Hotel La Tour probably pips them to the post, but only just).

Service here isn’t rushed, and it isn’t slow either, it’s paced so as to savour each course and conversation.  The acoustics are just as good for those conspiring to elope, as for those on a business dinner.  I’ve seen both types of diner seemingly having a joyful time.  We went for dinner here with twenty of our friends the night before our Civil Partnership, and had a fantastic welcome from the restaurant, so clearly I am biased.

Definitely somewhere you will linger over a dessert wine, brandy, or a coffee.  One of my favourite Brummy hidden gems.