The problem with trying to get around all of the fantastic new venues in Birmingham, is that it makes us ignore our favourites. Aalto Restaurant at Hotel La Tour is most definitely at the top of our favourite list but we’ve neglected to go for dinner since September. We thought we better get back to check out the Winter menu before it lurched in to Spring. Bartender Nick has added a list of mocktails to his menu especially for Dryathlon so it was nice to be able to drink something with dinner other than Coca-Cola or Lemonade. I especially enjoyed the Virgin Mojito, it didn’t taste virginal which I think is quite a feat. Never fear though, I’ll be sticking to the boozy ones come February, they make a super Old Fashioned and other classics. After supping a mocktail or two and chatting with friends in the Hotel Babylon-esque lounge we moved through to the intimate and modern dining room.

I like the chairs in this restaurant, muted fabric on bucket seats that are comfortable enough for a three hour sitting. I often wish I’d taken my own cushion to many venues by the end of the starter. The finer details at Aalto are impressive in a subdued kind of way – from the Birmingham Heritage Collection cutlery, to the attractive glassware, the weight of the napkins, and the uniforms of the waiting staff. Nothing here has been bought because they needed it, it’s been chosen because it fits the aesthetic.  The icing on the cake is that they take our coats so we don’t have to hang them on the back of our chairs – take a hint all the other nice Brummy venues that don’t  do this.  That detail is testament to the general attitude of all the staff, that customers are there to be served, and to be kept happy.  The staff are super friendly and I’d defy you to find better in Birmingham.

We had breads while we were looking at the menu, including chunky hummus with crispbread, and the sourdough which is served olive-oiled and chargrilled with a small barrel of roasted garlic dip which is sweet and silky smooth. Chef served an amuse bouche – a cube of

breadcrumbed and fried confit duck with an orange marmalade. The duck was buttery and rich, the crumb golden and crisp, and the presentation perfect – what’s not to like about cubic food? The bitter sweet orange marmalade complemented and cut through the richness of the confit.

The restaurant almost always has several specials available, as well as the normal menu that should suit every taste – sea bass, fish and chips, ham and leak pie, steak etc. I opted 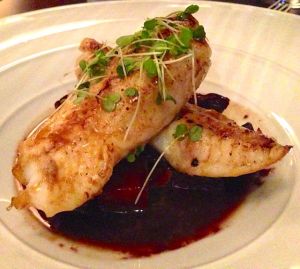 for the salt and pepper squid to start. I was quickly told that I could either choose another starter or have a variation on the one I’d chosen as the squid they had wasn’t as plump as chef would like. I went for the variation and the dish that arrived was lovely, with flavoursome salt and pepper squid and some lightly curried scallops – I’m glad I didn’t change my mind. We also had a starter of beetroot with woodpigeon, it was a very attractive plate that arrived with three types of colourful beetroot which works well with the gamey pigeon notes. The dishes of chicken muligatawny and scallops were also lovely.

For mains, I had the pigs cheeks. The piggy flavours were heady (ha, see what I did there, cheeks, head, oh never mind…) somewhere between bacon and ham. It was soft and fell apart in the bowl. The fillet of brill with watercress and herb potatoes was covered with a

burned butter hollandaise, I’ve never had that before but I’ll be sure to have it again soon as it was velvety and intensely rich. The fish and chips, which we’ve eaten many times before here, were as good as ever, and I still think they do the best chips in Birmingham.  Although there are always too many. It comes with a pea mayonnaise which is a nice change to either tartar sauce or ketchup.

Despite being completely stuffed after breads, starters, and mains, we had a few desserts. Of particular note was the bitter chocolate torte with raspberries, raspberry jelly, and raspberry marshmallow. We also tried the pistachio ice cream which tasted perfectly Italian.

Since that Saturday we’ve been back for Sunday lunch. It was a hearty meal including beetroot cured salmon, scotch egg, and a huge beef roast with shiny gravy.  It’s served on a board, which I realise some people don’t like, but I’m sure they’d do it on a plate if you’d prefer.

A three course dinner here will set you back about £33 without wine.  Sunday lunch is £19 for two courses, or £25 for three.

It’s just about coming up to its first birthday and seems to be going from strength to strength, we think this is the best meal we’ve had here.  When we are downhearted about a depressing meal somewhere, Aalto at Hotel La Tour is the place we shall come to remember what good service, and good food, is like.