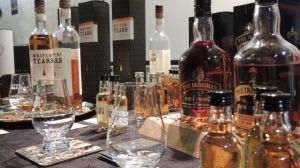 At the start of March I attended Whisky Birmingham 2013, the first in what local Brummy and organiser, Amy Seton, would like to see become a fixture in the Midlands ever growing list of epicurean festivals.

The Bond in Digbeth hosted the day which started at noon. It’s a lovely venue in the arts quarter of the city but I wonder whether next year they’ll try and expand, it was 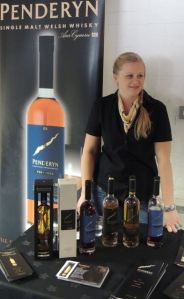 packed for most of the afternoon. As a complete non-Whisky drinker I was anxious that I’d feel out of place and I half assumed that it would be full of older hairy gentlemen that would scorn my lack of knowledge on the subject. Not so, it was primarily men, but there were all age ranges there, and everyone was keen to get me trying their products to convert me. I think it’s a good day out to take your dad to, which is what I did, he is a proper whisky drinker so I thought he could be a bit more critical about the event than me.

For those who’ve not attended a whisky tasting before here’s the lo-down on how it works. Pay your money for entry which includes a bottle of water; pay deposit for your tasting glass; get your “dream dram” token; get tasting. Basically you trawl around the stalls in the room, trying the different whiskies which are poured by 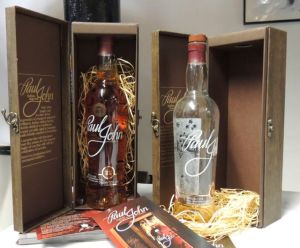 very enthusiastic sales people from the various distillers / distributors / specialists who will tell you all you need to know about what you’re drinking. I was surprised that the measures of booze were quite large, so by the end of the day I knew I’d had a drink! There are spittoons provided, but to be honest I don’t think I saw anyone use them. I probably tried about 20 of the 100ish on offer. Some of the extra-special expensive whisky’s are “dream drams” and you can try only one of those by exchanging your “dream dram” token for it. 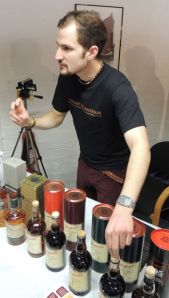 The first ones I tried were by Welsh whisky company Penderyn. We then moved on to a small batch Indian single malt called “Paul John” which I think is a peculiar name for an Indian anything but hey ho, we liked it anyway. We had a really interesting chat with the guy from Buffalo Trace bourbon whisky who also showed us the company’s other offerings like their Benchmark 4 yrs – who knew they weren’t a one-trick buffalo? We tried some whisky cocktails created by Julian from The Victoria, who were also running the after hours speakeasy for the event. So far I’ve only mentioned the weirder whiskies on offer, but there were plenty of Scotish and Irish whiskies on offer too including Writers Tears and old favourites such as Glenrothes, Highland Park, and Macallan. 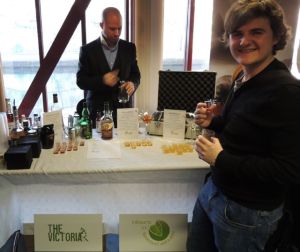 Western Arcade’s “The Whisky Shop” and Digbeth’s “Hard To Find Whisky”.  And of course if you’re a die hard whisky fan then you should try out The Birmingham Whisky Club for monthly whisky tastings and events.

Both my whisky drinking dad and me as a non-whisky drinker really enjoyed the event. Give it a go next year, we’ll give you a reminder when it’s coming up on outinbrum.com.