Vegging Out at Bistro 147

With a Peperami strapped to my calf in case of emergencies we went for dinner at the new vegetarian restaurant, Bistro 1847, in The Great Western Arcade. The arcade is having a growth spurt at the moment with a number of outlets from The Mailbox moving there temporarily while The Mailbox gets its roof on. If you haven’t been, you should give it a go for some shopping – posh shoes, boutique clothes for men and women, glorious bread from The Bread Collection, antipasti and cheese from Anderson & Hill, and wine in our favourite Birmingham venue, Loki Wine Tasting House.

The bistro is bijou, around 30 covers only, with simple furniture and decoration. I like their choice of cutlery and glassware, something that many venues seem to get wrong. Some of our party weren’t sure about the glass beakers for wine, but I liked them. It has only been open for a week, so there were a couple of completely forgiveable cock ups, apologised for profusely by very pleasant waiting staff who were mortified when they ran out of white wine (delivery due of course, and in the meantime we just popped next door to get some from Loki). The wine list is small with bottles from £15 to £20 a bottle, there’s also a range of beers on offer. The wines and beers are vegan friendly.

We had well-made cocktails, an English Garden and a Toffee Apple, and some of the snack “bites” to nibble while we were looking at the menu – I loved the pineapple soaked in gin and served with a creamy and pungent blue cheese. It’s a fixed price menu at the moment, with two courses for £16 or three courses for £20 – that will change so get in early for a bargain.

For starters I had the pickled cauliflower with kohlrobi, carrot, blackberry, and “cashew ricotta” – a recipe (containing no ricotta!) Chef Alex Claridge picked up in Los Angeles. The dish was vegan and gluten free. It was pretty, and unusually savoury, maybe a tad too

savoury for me although the blackberries did lift it somewhat. The mushroom and liquorice pate (vegan, and gluten free option available) was rich and bursting with mushroom, I really enjoyed it. The star of the starters though was the vintage cheddar brulee with apple and Hazelnut – served with a crispy top, and toast to dip in it. We didn’t realise until we got there that Alex was now working with the guys from Bistro 1847, who have another two venues already open, and more on the cards. Alex used to run The Warehouse Cafe – a vegetarian restaurant in Digbeth which we loved. Vegetarian food can often be bland and boring, but the food produced for us was anything but. The very attractive dishes would not look out of place in fine dining establishments.

I had the crispy hen’s egg for my main, a runny hen’s egg coated in breadcrumbs and fried. It was served on crispy leek and onion with smoked potato, delivered under a wood smoke f 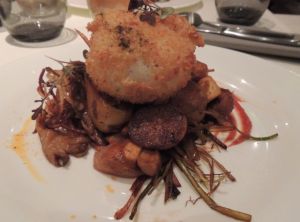 illed closh – a bit of table theatre. We also tried the “Oh I do like to be beside the seaside” – veggie fish and chips. The “fish” was haloumi which had been soaked in mead and then battered with a balti batter, and was surprisingly fish-like! Many of the dishes, including the fish and chips have vegan and gluten free options.  In that dish the haloumi can be swapped out for tofu. My favourite dessert was the hedgerow mess (rosemary meringue, cream, chambord, and blackberries) which was a lovely flavour combination.

I look forward to going back in a couple of months when they’ve had a chance to settle down, but our first experience of it was very good other than the opening week hiccups. For those of you who are a bit sceptical about vegetarian and vegan food – do give this a go. This isn’t the stuffed mushrooms and oily aubergines of culinary nightmares, it’s serious attractive cooking with fantastic flavours.

Delicious. We will be back.

6 Responses to Vegging Out at Bistro 147