No doubt by now the Birmingham city dwellers among you are already bored of the marauding hoards of Christmas shoppers around town who, this year, seem drunker than ever before. The Custard Factory is running a market – Digmas – on Saturday 14th which could prove to be an Alternative Independents antidote to the twee commercialism of the Frankfurt weihnachtsmarkt.

Running 10 till 6 it will feature:

Taking part in the Digmas festivities for the first time will be independent record store Left For Dead.  The shop was opened just a few week’s ago next to Scott Lake in The Custard Factory, by music shop geek Andy. His wife spent a year’s honeymoon being dragged around music shops the world over: Red Eye in Sydney, Polyester and Greville in Melbourne, Real Groovy in Wellington, Amoeba in Los Angeles.

We caught up with Andy in his store (that he’s finishing off) and asked him what made him take the risk of opening his own business:

“It was while I was browsing through the racks in Junction Records in Fremantle that I decided that when we got back to England I’d try to start up my own record store.  I got the name Left For Dead from the opening track on Ryan Adam’s 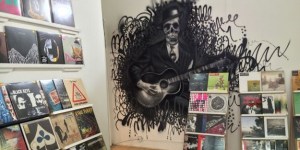 Heartbreaker.  Or was it my ironic take on people’s perception that downloading is the death of record stores?  For me, Left For Dead is a lifelong dream.  At the moment I’m concentrating on building up my range on vinyl and CD.  I stock catalogue & new releases across all genres: folk, blues, jazz, metal, hardcore punk, hip hop, electronic stuff.  I also want to stock recordings by local artists.  In fact, I’d love for Left For Dead to be the place where musicians can meet and connect

over new music.  For me, that’s one of the great things about working in a record store, being introduced to new music by punters.  I’m also looking for bands to play in store.  With Record Store Day in April I’ll be looking to put on loads of stuff to make it a real day out”.

Further details on Digmas 2013 can be found here.