The thought of leftover turkey sandwiches and Christmas cake on Boxing Day is too much for us to bear, so we always head out for food, usually to an Indian restaurant to have something spicy. This year we took the ‘rents to Celebrity Indian Restaurant in Brindley Place. There are dozens of Indians to choose from, but this is our go-to favourite place when we want tasty Indian food and good service.  Price-wise Celebrity is in the middle tier of the Indian food establishments around the city.  If you want pricey but perfect Indian food then head to Lasan or Asha’s, or maybe Pushkar if you want something a bit trendier and with super cocktails. If you want cheap as chips head to Royal Bengal on Smallbrook Queensway, which despite being inexpensive still offers great tasting food and friendly service.

We had papadums and chutneys with Cobra beer while we looked at the menu. I’ve no idea 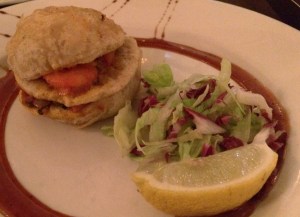 what the wine menu looks like as I’ve simply never found wine that seems to match Indian cuisine. I’m told fruity rose works, as do some sweeter wines like Gewurztraminers, or even something perfumed like a Torrentes. I’ll stick to my lager, thanks. Any of my friends tempted to chip in here with the red-wine-boxing-day-curry story should remain silent.

The menu is split between “traditional” dishes (jalfrezi, korma, tikka massala, pathia – all around £10) and “signature” dishes. The latter are twists on traditional dishes like a starter of Machli Tikka (tandoor roasted Scottish salmon marinaded in herbs – £5.50), or Horin Steak (marinaded venison fillet – £14.95).

For starters I had Prawn aur Puree, which was spicy and fresh. We also tried the chicken wrap, chicken and red pepper samosa, and a newly devised version of an onion bhaji. Rather than it being a traditional ball of doughy onion which can be virtually raw on the

inside and unpleasant, Celebrity gave us a loosely connected pile of spiced-tempura battered sweet onion slithers. Crisp, different, and moreish. For mains we tried the lamb biryani, vegetable pathia, and chicken tikka achari. The pathia was sweet, sour, and spicy, and had a nice mix of veg. The biryani was also very good, with tender lamb. Service was chatty and pleasant as always.

With a couple of beers each and two courses the bill came to about £25 a head. Very enjoyable.

Find out where to eat, drink, and be merry in Brum.
View all posts by outinbrum →
This entry was posted in Area: Brindley Place, Cuisine: Indian, Price: Average, Venue type: Restaurant and tagged birmingham eating out, Birmingham Restaurant, birmingham restaurant review, birmingham review, Out In Birmingham, out in brum, Where To Go In Birmingham. Bookmark the permalink.