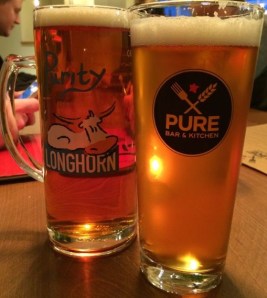 Purity have been up and brewing since 2005. They started out in some disused barns in Warwickshire shipping their wares to shops, festivals, and anyone who’d buy them.  Now they’ve moved to a new brewery and from there they’ll also be shipping their own stock to their first bar which has opened quietly on Waterloo Street in Birmingham’s Colmore Business District – Pure Bar & Kitchen.

Purity are an independent business committed to sustainability and have invested in their new brewery to make sure it’s both energy and water efficient.  It’s the second specialist brewery to open a venue and join Birmingham’s ever growing dining and boozing scene in 18 months. The other is Brew Dog which has proved incredibly popular with many discerning drinkers who choose to part with their £5 for a pint there rather than spending half as much getting 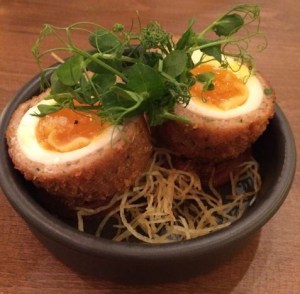 twice as drunk in some of the second city’s less classy establishments.  Like Brew Dog, Pure Bar & Kitchen, has gone for the stripped down industrial look with bare concrete and brickwork.  It is perhaps slightly more gentrified, with lots of seating for dining and drinking, and a modern irony tinged menu.  I swear, I’ve seen enough “fish and chips” in quotes on menus recently to make me scream.  It’s either “fish and chips” or it isn’t.  If I wanted sodding endangered Black Cod fish fingers and sweet potato fries, that’s what I’d order.

Tonight the place was full of hipsters and suits.  I felt out of place without a copy of Forget Foucault, a beard and/or a pin stripe and aggravating gaffaw.  Usually I also feel out of

place in such establishments because I don’t like craft beers.  Give me a long cool Italian any day, but I won’t thank you for a Mad Goose or Punk IPA.  I have to say though that I enjoyed Purity’s Unlawless Lager.  There are 16 draught beers on tap at about a fiver a pint, plus bottles, spirits, and a nice wine list (Tin Pot Hut Sauvignon Blanc £29).

We tried the Pork Scratchings in the bar, they were a bit of a disaster being chewy and not near salted enough.  Speaking as a good Black Country boy who used to work next door to a scratching factory I feel able to comment with some scratching eating experience.  We weren’t the only ones to leave a full serving on the table.  The bar tell us they’re sorting those out.  I wouldn’t brave any of the other bar snacks – although the Pork Pies looked lovely they were un-refrigerated and uncovered to be sneezed over by all and sundry – again, the bar tell us they’re sorting that out.  It is the opening week and they no doubt deserve a chance to fix arising problems, and given they wrote back on version one of this review within a couple of hours of it going live, I’d say they are pretty on the ball and will make amendments very swiftly. 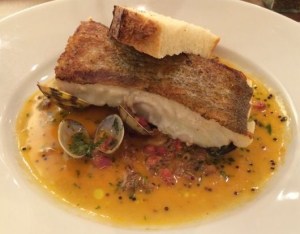 The restaurant food was excellent.  I started with the Caesar salad (£4), which had a creamy Parmesan sauce and salty anchovies on blackened baby gem lettuce, and then moved on to the Veltins Pot Roast Cod (£14).  The cod was delicious with a chorizo, clam, and tarragon sauce.  We also tried the Scotch Egg (£4.50), which was perfectly gooey in the middle, and the BBQ Beer Glazed chicken (£13).  With that we had a problem – it was rosey pink in the middle by the bone.  Chef told us that it was cooked, and that it was because it was steam cooked that it had remained a pinky colour.  I do believe him because it’s not the first time over recent years that I’ve seen it, as kitchens have relied more and 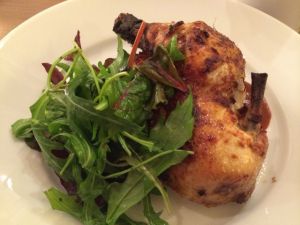 more on  steam ovens and are increasingly worried about serving chicken overcooked.  Nonetheless, I won’t eat pink chicken, and it was gracefully taken off the bill even though my worries were those of an ignorant eater rather than a trained chef.  The bit of the chicken I had already eaten had a good tangy barbecuey flavour.

For pudding (all £5) we had the chocolate brownie with Bacchus Kriek (cherry) beer ice cream which worked really well.  The peanut butter ice cream which is served with hot caramel sauce, peanuts, and a glass of beer, was different and very tasty.

The staff are lovely, the beer is good, and it’s located in an area of town that seems to be

up and coming with the foodie set – virtually next door to the recently opened Chung Ying Central and The Bureau, both high end establishments.  If the food is consistently this good then it’s bound to become The Place To Be over the coming months, so if I were you I’d get in early while you can.  With regards to the few issues we had, bear in mind this is only day two of them being open, and it’s their first venue.  Give it a go, and let us know how you get on.  I’m sure we’ll return soon.