Some people look at New Year’s Eve as a night to remain firmly on the sofa in front of Jules Holland. Not so us. It’s one of our favourite nights of the year, and we usually start researching it in August, and “research” really is the only verb that gets across the amount of effort that goes in to working out where we will be dining and drinking when Big Ben bongs twelve. Over the past couple of years we’ve greeted the New Year from One Horseguards hotel’s terrace opposite the London Eye, and from a hot tub with bottles of champagne in mid-Wales. This year we wanted to stay close to home but our go to restaurant, Adams, was closed. In fact lots of our normal places were closed – apparently chefs also like to celebrate on New Year’s.

Our most local Michelin starred venue, Turners in Harborne, was open so we booked there. We were not disappointed. The restaurant is nestled on Harborne High Street between some random shops and is best described as unassuming, a grey frontage with white moniker. The interior is cool and intimate, although I note they’ve had a refurb since we went, I am assuming they won’t have had a dramatic change in the interior décor and switched to rag-rolled Mexican.

We didn’t have the most auspicious start unfortunately as one of our group of four was fine until late afternoon and then became violently ill, I’ve christened the yuletide period in 2014 as #sickmas – everyone was ill at one point or another, including me. Graciously the 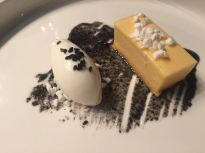 restaurant waived the cancellation fee, which given we couldn’t cancel the place until we got there they would have been well within their rights to charge. When we booked they were also brilliant about the fact that of the four of us, one had a dairy allergy, one had a nut allergy, and one had a shellfish allergy. I’m the easy one, and can confirm that catering a dinner party for those dietary requirements can be a bit of a pain.

Usually the restaurant offers á la carte as well as taster menus, but NYE is a special menu just for the evening, and this year as it’s coming near to its tenth anniversary there were nine courses, one for each year it has been open. Although if you include the “snacks” and mignardises there were eleven courses all in. We opted for the wine flight rather than having to pick and choose bottles for just the three of us. As it was rather an extensive menu, with wines to accompany each course, I thought I best give you the full menu with paired wines. Read it and drool.

It was all excellent, but if I rave about everything we’ll be here all day so I shall highlight those things I thought particularly exceptional. Firstly, the oyster. Served in the shell which had a sort of set potato and horseradish buttery terrine with a silky mouth-feel. Then on to the smoked duck liver, served with frozen thyme granita which really worked for me because I like the contrast of temperatures, and I like duck liver and thyme. The squid “carbonara” was a technical feat – foam as light as air with the cheesy intensity of parmesan covered thin ribbons of squid which was the “carbonara” (i.e. no pasta in this dish, just the squid) in a delicate sauce. 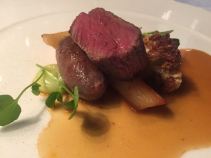 The celeriac is baked, whole, in a salt crust (I think) and was carved and plated at the table by the eponymous Chef Richard Turner. Table theatre like this really turns the evening in to an event. Theatre on its own isn’t enough though, the food has to be spot on, the celeriac was tasty and served with a glossy consommé and a decadent amount of shaved truffle.

Sea bass was served with a crackably crispy skin and snow white soft flesh. I love venison and it was served rare and tender, and I particularly liked the strong flavoured venison sausage.

I’m a big fan of French ordered menus, that is having cheese before the sweet, and the Billat Truffe was very nice ahead of the chocolate with flavours of beer which I could sit and eat all day. The last dish on the menu was Kalamanis, a cheese curd and yoghurt on a savoury sesame base. Then followed mignardises.

I don’t think you want to know how much it was, but it’s the same price as any other Michelin starred restaurant on New Year’s Eve. I’d thoroughly recommend it and I’m sure we’ll be trying it out over the coming year for lunch or dinner. Thanks to Chef Richard Turner and his team for some very memorable food.