Nomad: Waiter waiter, there’s an ant in my soup!

Waiter waiter, there’s an ant in my soup! …Don’t worry sir, the echidna nibbling your bread will soon get him. <Pause for laughter after monotreme related joke>.

We’ve eaten Chef Alex Claridge’s food around his various locations in Birmingham over the years – first at The Warehouse Cafe, then Bistro 1847, and now at his current temporary residence, Nomad at Kitchen Garden Cafe. He’s currently searching for a forever-home in Birmingham for Nomad restaurant so do get in touch with him if you have somewhere in mind.

Alex is an experimental chef. While not a veggie himself, his last two residencies were at vegetarian restaurants, the menus of which require significantly more imagination than carniverous establishments which invariably

offer obvious steaks, chops, meat pies etc.. Consequently Alex has a brilliant repertoire of inventive ingredients to delve in to.  Many of the ingredients are sourced from his allotment, or foraged locally.

We’ve eaten a couple of times at Nomad and have had some delicious meaty, fishy, and veggie dishes. The format is around a seven course fixed menu for around £40 – the number of courses, the contents, and the prices change dependent on what ingredients Alex has to play with. The menu we’re reviewing here won’t be exactly the same on any subsequent night. I know that some of the dishes have pushed people’s boundaries – but that’s kinda what Nomad is about!

Probably one of the most divisive elements in the dishes we tried were the wood ants. Yes,

really, actual ants. I was completely prepared to dislike them but they were tasty! Not only do they add visual interest, they add a crunch, and they have a tart citrus flavour, that complimented a dish of heritage tomato and “tomato water” – a clear, slightly syrupy, colourless extract from tomatoes left in a muslin sieve for twenty-four hours to juice themselves by gravity alone. The flavour has great clarity, and it was very summery.

After the opening tomato dish, we had hay smoked rabbit with carrot cake and a carrot coleslaw. The rabbit was heavily smoked, one of us loved the smokiness, but I’m not a big 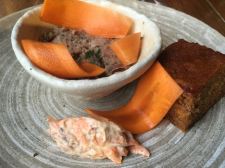 fan of smoky food so it was a bit lost on me. If you like smoky food you would have loved it I’m sure.

Next course was globe artichoke, seared lettuce, and baby rocket. Then on to wild sea trout, broad bean, pea, pearl barley, sea blight (a bit like samphire) and pepper dulse. The pea, bean, and barley were made in to a of risotto and its greenness underlined the succulent pink sea trout that had a tasty and crispy skin. The pepper dulse smelled so strongly of the seaside that it took us back to fish and chips on the promenade as children.

The three courses of desserts started with a small dish of rhubarb iced cream with raspberry, a superb and fresh pallet cleanser before the “sea buckthorn meringue pie”: sea buckthorn curd and parfait, cumin roast carrot, meringe, and pea shoots. Then on to the 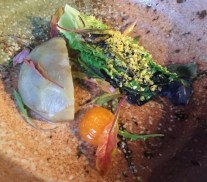 At the moment Alex plans to continue his pop-up in the rustic Kingsheath Kitchen Garden Cafe until the end of August, so if you want to go and experience Alex’s food there you’ll have to get there soon! You’ll need to book, and you can do so on the website here: http://foodbynomad.com/ .

Nomad is an opportunity to have some great food, that’s a bit different. Go on a date, or take your friends, either way it’s sure to reward you with shrieks of fun, and ooohs of delight. Loved it.

Note: We booked the restaurant out for my birthday at Nomad and had a really smashing time and an excellent menu, and Alex then asked us to go back and eat on him to review. You probably know we rarely review free food because we don’t think it gives the real measure of the place, but in this case, given we’d dined here already on a night we couldn’t review (because it was my birthday and we were too busy eating and drinking to be taking photos of the food and taking notes), we couldn’t refuse! See our reciprocity promise here. 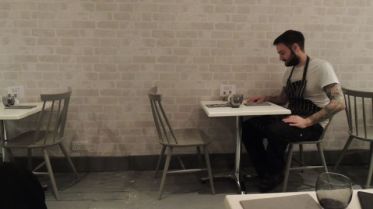