Food by Nomad: the Man and the Myth

I feel a little like I stalk chef Alex Claridge as this will be the fourth, and not final, review of his food I’ll post having followed him around from The Warehouse Cafe, to Bistro 1847, then on to the Food by Nomad projects – Nomad pop-up at The Kitchen Garden Cafe in Kings Heath, and now “The Man and the Myth” pop-up, currently located at Urban Coffee on Church Street in the city-centre. Of course, chef-owner Alex is not the only brains in the outfit, as he works closely together with Nomad head chef Brian Smith and head chef for The Man and the Myth Tom Harrison, putting together the menu that changes daily, selecting ingredients from their own allotment.

The format for Man and the Myth is what you make it. There are around eight dishes priced individually on the menu, from about £3 to £5 each. You can have one, two, or a 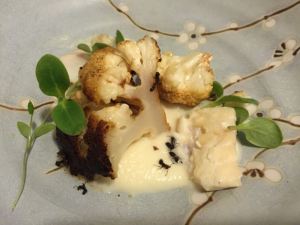 few, or if you want you can have a “kitchen roulette” option like a tasting menu for about
£30. The eight or so wines are available by the bottle or by the glass but you won’t be able to pick by wine name or grape type – you’re given just tasting notes and a price by size £3.50 for 125ml, £4 for 175ml, £18 a bottle. We had a few glasses of the “white peaches and tangerine, crisp finish”, and the “old school and boisterous, rich blackberry flavours” – still don’t know exactly what they were but they were delicious and complimented the unusual food. 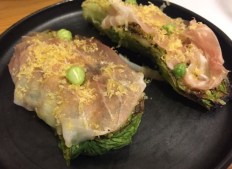 Obviously we chose to have all eight dishes, in the interests of research or course. Much of Alex’s food is non-meat focused, more-so than most other chefs I think, and there’s always something clever and unusual on the menu. My favourite dish on the menu the night we were there was the King Oyster mushroom cooked in beef dripping. With its dense texture and flavours of beef fat you’d be hard pushed to tell the large golden fried mushroom wasn’t something much meatier.

The cauliflower dish was served with citric flavoured wood ants (citric from their natural formic acid), with coriander, fishy borage and and salt cod. The ants are becoming a bit of a signature menu item, and much as it may put people off, I’d urge you to try them – they really do add a lemon crunchy note to the dishes.

A dish of bitter blackened gem lettuce and ham was garnished with grated cured duck eggs and nasturtium capers, a horseradish flavoured fresh ingredient that I’d not had before, which had been picked that day from their allotment. Vibrantly green “risotto” of peas and broad beans was served with a strong black pudding and peppery nasturtium leaves, and was also picked out as a favourite of one of our diners.  We finished with a cheese course (summer truffle, blue cheese, and fresh ripe fig), and then finally a sweet of wild blackberries, blackberry sorbet, caremelised yoghurt, and mint.

There’s an emphasis on foraging and seasonality and indeed if you’re eating there this week you may well end up with plum’s from @DanOffTheRadio‘s garden, as he delivered a batch to the team after eating there last week.  He described the experience of the food succinctly as “unusual, beautiful & delicious” – a sentiment I agree with.

The Man and the Myth will run for the next couple of months ahead of the opening of Bar by Nomad slated for late October with head chef Tom Harrison.  Alex’s and his team’s food is a

great value way to try some high-skill interesting cooking. Try and get to The Man and the Myth if you can, you can book by using this booking link.  To see what other exciting things are going on follow Nomad Restaurant on Twitter to see how the concept develops in to the bar, and their own restaurant in the new year, and no doubt other projects before now and then.

We ended up with a couple of freebies, though we paid for mostly everything – see our reciprocity promise here.