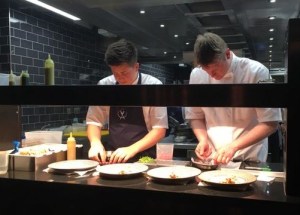 We were not surprised to see on twitter that within weeks of Adam’s Restaurant moving from their “pop-up” twenty-eight cover venue on Bennett’s Hill to their new larger and permanent establishment on Waterloo Street that the Michelin guide inspectors just happened to be in the city. We’ve always felt that chef Adam Stokes is one to watch and are hopeful that he’ll be the first in the city to gain a second Michelin star. Whether you agree that the guide is “a tool of Gallic cultural imperialism” favouring a classic and formal French style, few would disagree that those venues who gain and keep their stars do offer something special, which is exactly what Adam’s is – something special.

With the larger restaurant and much larger kitchen (the size and utility of which other Birmingham chefs must be weeping over) comes more options for dining. You can now take a three course lunch for £35, a three course dinner for £60 (except Saturdays), or an 8 course taster menu for £85. We took the taster menu at the first sitting of the chef’s table.  For larger parties the marble horseshoe chef’s table can seat around a dozen overlooking

the pass. We had great fun watching our food getting prepared and cooked and then plated and checked. I’ve not had such a good view of a kitchen before. It was really captivating to watch the furrowed brows of chefs checking this and stirring that before presenting to the pass for its final finesse before service, or indeed on a couple of occasions to be rejected, with a moment of pique from chef, as sub-standard.  You don’t have to book the entire chef’s table – you can just book a table for two. Alternatively for up to around fourteen guests there’s a private dining room, which is of course as elegant as the rest of the dining room and bar. 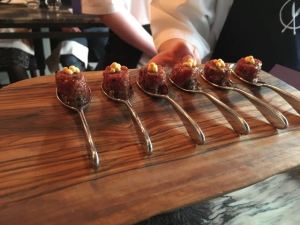 Service here comes with quiet efficiency and the warm smiles of people who know what they’re doing and want you to have a great time. Get chatting to one of the waiters and you may end up with a drop of his private stock of Port from his Portuguese home town, or comparing notes on the best Calvados with restaurant manager Marcellin, a Normandy native. Of course when it comes to the wine, sommelier Shaun will help you choose a spot-on wine match to go with your meal, whatever your budget (from £25 a bottle to hundreds).

Counting the chef’s snacks and chocolates we ate around sixteen different things. A tour de

force, but not one that left the diner feeling bilious, the skills of menu balance here are impressive. As “snacks” (for which, read amuse-bouche) we had earthy beetroot macaron with goats cheese filling; steak tartare bites with miniature egg yolks; crab on the tastiest crispiest chicken skin; and juicy tempura prawns with silky bearnaise. On the horshoe chef’s table the waiters served from the inside and then chef explained what was offered. This was very effective and gave an opportunity for questions to the kitchen team including the imposing eponymous chef Adam Stokes, and to the other half of the Stokes team, Natasha.

After snacks came the best minestrone I’ve ever had with punchy sausage and sweet prawns. Then succulent veal sweetbreads with cauliflower and hen of the woods mushroom. Onward we had snow-white halibut with brown shrimp, shitake, and leek.

Next up was my stand-out dish of the night: hare with minus 8 vinegar, watercress, blue

cheese, blackened onion, and chocolate. Sounds odd, no? The combination was like a magic trick, the earthy notes from the chocolate underlined the flavour of the hare and was punctuated by the blue cheese. Loved it, a very clever dish.

Next we had prawns with “popcorn” – sweetcorn shoots – an ingredient I’ve not had until this year but I’ve now had twice (the other time at Mortimer’s in Ludlow), so I think it’s safe to say it’ll be on-trend and coming to a restaurant near you soon. Then on to plump scallops with white onion, baby leeks, and rhubarb, followed by lamb with onion, miso, and fennel. I loved the next savoury dish of Tunworth cheese with cauliflower, and then we moved on to puddings. 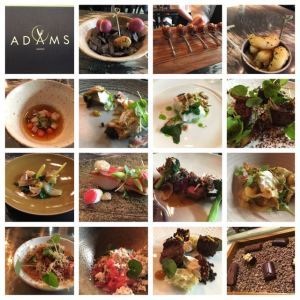 First up was rhubarb with grated foie gras where the luxuriousness of the liver was cut through by the sweet sour rhubarb. Then rhubarb with nasturtium leaves and a “crumble” type ash. After the rhubarb parts one and two, we had aerated chocolate with an aerated sponge with mint and orange, and then finally, chocolates.

I’ve not yet talked about the wines. The taster menus can be taken with a well matched wine flight. With our dinner we had ten different wines with a good selection from all over the world. We started, of course, with a glass of Champagne Jacquart, then moved through France with a Limoux, on to Austria for a gruner veltliner, then to Australia for a what I think was a cabernet sauvignon from Promised Land, then Argentina for a lovely floral Torrentes (a current 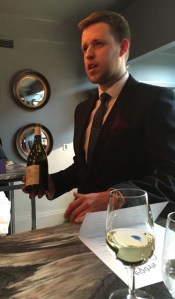 favourite), then California, Portugal, and Spain, before arriving back in blighty for a Nyetimber demi-sec sparkling, before completing our wine road trip in Sicily. Not a dud among them.

We’re a tough crowd to please.  Not least because often when we go out as a group we have four significant dietary requirements – one pescatarian, one nut allergy, one shellfsh allergy, one dairy allergy.  This was handled admirably and each diner had their own printed menus tailored to their various allergies.  Even the wines were paired differently for the courses which were changed for those with dietary issues (or as I like to call them, the “fussy” eaters – only teasing!).

This is a place to go for a wonderful celebration, and now with the addition of the a la carte menu it can be more affordable, and gives an option for more frequent visits. 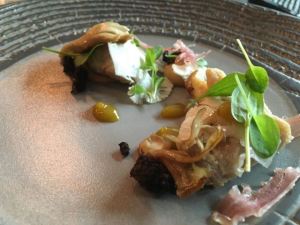 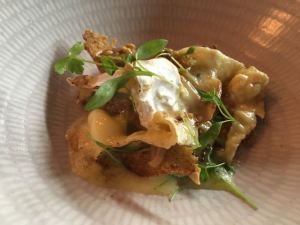 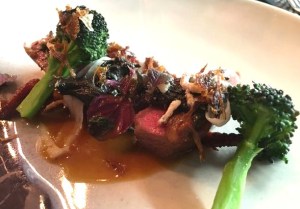 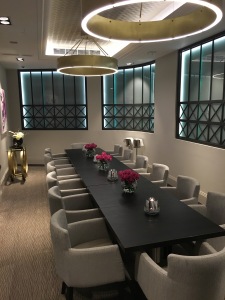