A Taste of Japan by Tim Anderson at The Balcony, Selfridges 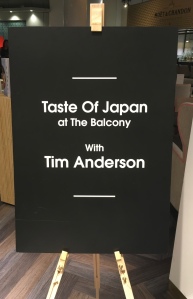 Last week, we were lucky enough to be invited to The Balcony in Selfridges where MasterChef winner Tim Anderson was hosting an evening of Japanese flavours as part of their Taste of Japan campaign which has been running across all departments.

The evening introduced us to Tim’s cooking, which is best described as traditional Japanese cooking with a modern twist. 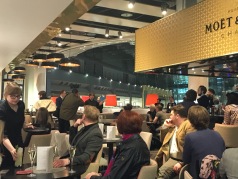 Since winning Masterchef in 2011, Tim has used his time to expand his culinary business.  His repertoire now includes being a freelance chef, food writer, consultant, and his latest addition, opening Nanban Japanese soul food restaurant in Brixton, which also lends it’s name to the latest must have cookbook to hit the shelves.

The evening started with a glass of Prosecco in the bar area of The Balcony where everyone could relax and mingle before dinner, prior to being introduced to the evening’s menu by Tim.

Our first dish was Yaki Imo, which was a baked sweet potato with ponzu butter and sesame salt. My fellow diner for the evening was a real hater of sweet potato and was dreading this dish. However, the soft and succulent portion of purple buttery loveliness that greeted us was nothing like any sweet potato either of us had tried before and

he was won over.

This course was served with a Tedorigawa Junmai Yamahai Sake which went great with the pickles.

Second up was Chicken Karaage, marinated deep-fried chicken thighs. Tim had introduced this as his JFC dish (Japanese Fried Chicken) and it didn’t disappoint.

My only experience to date of Japanese chicken dishes has been the Chicken Katsu Curry at Yakinoro, which I think everyone knows is a personal favourite. Tim’s JFC hit the spot for both o 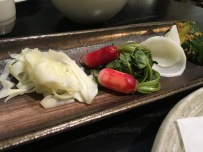 f us with moist, succulent meat, surrounded by an uber-crisp coating. The closest I have come to this dish before would be the buttermilk chicken at The Butcher’s Social.  A pickle plate of fennel, cucumber and radishes accompanied these first round of taster plates.  Our friend and fellow foodie @SKCWitter had recently told us (much to our disbelief until we checked wikipedia) that KFC is MASSIVE in Japan for a Christmas day family meal!  Here’s a link if you don’t believe me.

Onto the main event. I think most people had been excited to get to the Ramen having heard the description on the event page and also seeing such an evocative picture on the cover of Tim’s cookbook, which had been strategically placed at the entry of the restaurant. 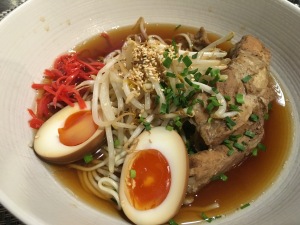 I don’t think anybody present was anything other than impressed when the bowl of Ramen Soki Soba was placed in front of them. Okinawan-style pork ribs in katsu dashi, with nira, pickled ginger, bean sprouts and a tea-pickled egg with a delicious, slightly gelatinous yolk. This dish was served with a bottle of Hitachino Classic Ale.

The dessert I think was always going to be a challenge for both of us. The combination of banana miso ice cream, with black sugar syrup, 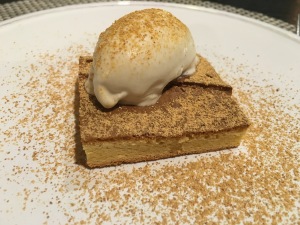 kinako and castella cake was always going to be a unpopular dish on our table as we were both banana haters. With the help of a glass of Hibiki Harmony whisky, I managed about half of the ice cream before having to admit defeat and scrape it off to get at the cake underneath.  I can see, and appreciate the flavours being used, but the banana won the battle as the main taste and I just couldn’t do it.

After the meal, and whilst the staff who had been very attentive all night struggled to serve us green tea under the weight of the beautiful cast iron tea pots we love at The Balcony, there was opportunity to meet and have a chat with Tim.  He signed plenty of copies of his new cookbook (£17).

The Balcony in Selfridges is open all day and serves up a choice of brunch, afternoon tea or and lunch and dinner, and has started to host guest chefs for special events including over the past few months Tim Anderson, and Anthony Demetre. Keep an eye on their twitter for more events to come.

It was a freebie dinner but we paid for beers.  See our reciprocity promise here.