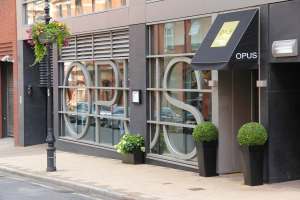 Opus Restaurant opened on Cornwall Street in the business district over a decade ago.  It’s seen times of boom and bust, and continued serving the local business community despite the ever smaller appetite for extravagant client lunches.  Of course it doesn’t only serve the local offices, those in the know about Birmingham food have been long-term supporters.  Their approach to sourcing food gives them wonderful produce to showcase, and indeed they often run specialist dinners themed on their suppliers, from humble potatoes to decadent champagne.

It’s been made-over in recent years and now sports a warmer pallet of greens, blues, and

wood.  It is still fine dining, with white table cloths, delicate stemware, and gleaming silver cutlery, and polite staff escorting you to the bar for a pre-dinner cocktail and then to your table.  I don’t think there are any other Birmingham fine dining restaurants though where you can dine on a Friday evening with two courses and half a bottle of wine for £25.  We were invited to try this extension of their daily market menu offering (which is two courses for £20).

On the Friday night we dined, there were two starters and two mains to choose from.  I’m not a big soup fan, but for those interested it was carrot, carraway and corriander.  The other option was whipped Rosary goat’s cheese, heritage tomato and english radish salad, watercress and grape dressing.  The goat’s cheese was creamy and smooth and set off by the slightly sharp heritage tomato and cool peppery radishes.  The serving of goat’s cheese was very generous, and I enjoyed some herby focaccia with it.  I noticed that the couple next to us were also taking the Friday night menu and had opted to share a starter and a dessert, thus both taking two courses but having the benefit of trying the three.

For my main I took the plaice.  It was again a generous portion, cooked to burnished gold.  The day-boat fillet of plaice was served on a bed of pearl barley, with florets of mild cauliflowers and tangy capers, and dressed with pea shoots.  The flesh was white, firm, and sweet and cooked to just done, which for me is spot on, no one wants over-cooked fish.  While fish dishes tend to be on the lighter side, this was filling and hearty.  There are few restaurants in Birmingham that do fish well but Opus is one of them (for good fish you should also check out e.g. JuJu’s, Pickled Piglet, I’m told Le Monde, obviously Adam’s).

We also had the roasted rump of Dexter beef with creamed potatoes, asparagus, and red

wine and shallot jus.  Dexter beef usually has wonderful flavour and this did not disappoint, packing a bovine punch.  The large portion of creamed potato (we couldn’t eat it all!) was very buttery.  The asparagus was tender, and the dish was finished with a rich and tasty glossy red wine jus.  A lovely traditional and tasty dish that I’d eat any day of the week.

All in we thought this was a really good value Friday nght meal in a very nice fine dining restaurant, with great quality ingredients.  You could bring your parents here, or have a romantic date, or come for a business dinner.  Top job as always.

As regular drinkers and diners at the Opus bar, restaurant, and cafe, we were asked to try out their new Friday night menu on them – if we didn’t genuinely like it we wouldn’t go there all the time.  We don’t do many freebies but when we do we always point you to our reciprocity promise that says we’ll give you an honest review, and be clear about when we don’t pay – we think that’s important.