We wouldn’t normally head to Wylde Green for dinner, it’s not known for its culinary excellence.  Our friends however said we must try the 80’s dining experience that is Gavino’s Italian Restaurant, promising Cinzano and melon boats aplenty.  Understand though that this wasn’t a theme night at this local eatery, but rather a restaurant so stuck in the past that “avocado” comes with the suffix “pear” and where I could probably get an Orange Juice Starter if I were so inclined.

Having holidayed in Italy a few times, and enjoyed some wonderful Italian food around Birmingham over the years, I’m not an Italian food novice.  Mediterranean food tends to exploit and showcase the wonderful sun drenched produce and fruits of the ocean.  Gavino’s merely mourned its passing. 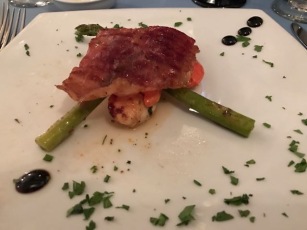 When we arrived we were shown sternly to a meanly proportioned table and overly heavy chairs, overlooked by ancient looking dusty chianti bottles in their straw cases.  On googling, I have found that these bottles are called “fiasco”, which is rather apt given how the rest of the evening proceeded.

There were a fair number of people in the restaurant, many of them glumly sat in probably the same position they have each week, I hear it’s somewhat of a favourite for many.  We’re not a very lairy bunch but we do have fun and laugh at the dinner table.  The waiter looked aghast as we chattered and giggled, I suspect he was unused to the sight of people enjoying themselves.

For starters, despite the obvious draw of the Prosciutto e Melone (“Galia melon covered in thinly sliced ham”, £5.50), I opted for the Avocado e Gamberetti (“Avocado pear with baby prawns garnished with marie rose sauce”, £4.95).  The avocado was ripe at least.  The meagre portion of prawns was deluged with a marie rose sauce freshly squeezed from a

bottle, leaving an unattractive pattern reminding me of lugworm casts on the beach.  We also tried the Capesante Prosciutto e Asparagi (scallops with prosicutto and asparagus, £6.95).  The scallops were so embarrassed by how overcooked they were they’d pulled a sheet of crisp prosciutto over themselves.  When dropped from a height of six inches on to the plate they managed a respectable three-inch bounce.  None of the other starters fared better.

For my main, I ordered veal “fried with demi-glass (sic), Marsala wine and black pepper” (£14.95).  The sauce tasted not unlike the chocolate sauce used on ice cream cones.  I’m not sure whether that was chef’s intention or whether he’d cocked up the labelling on the

demi-glace.  I fear some people may have ended up with vanilla ice cream and veal sauce.  I thought the price point was high given that no sides at all come with it.  Just a bit of veal on a plate.  We added a greasy and limp zucchini fritti.

The Lasagna (£12.95) and Spaghetti Bolognese (£11.95) tasted of unseasoned beef mince and uncooked tomato.  The calamari (£13.95) which promised “fresh squid rings deep fried” tasted of yesterday’s sunflower oil and looked like they were freezer to fryer from Iceland.  The beef fillet (£17.95) (“8oz beef fillet steak, pan fried and cooked in a madeira wine and demi-glass, topped with pate and served on round toasted bread”) was fine, though they’d drowned it in sauce that had an unpleasant maroon colour.

We declined pudding and the Harvey’s Bristol Cream digestif and legged it to The Butler’s Arms for cheese instead.

Special mention must go out to the poor building extension they’ve had done which has left an opening window from the toilet in to the corridor.  You couldn’t make it up…