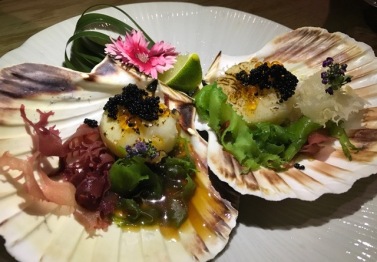 We first visited Rofuto just after opening in early 2016.  The former 60s carbuncle that was Auchinleck House on Five Ways at the end of Broad Street was well and truly stripped and whipped into shape as the UK’s first and only Park Regis hotel.  The swanky Park Regis brand of course needed a destination restaurant and bar, and Japanese inspired Rofuto is just that.  Situated on the top of the building, which is itself at one of the highest points of Brum, the restaurant and bar offers 360 degree views across the city and out towards the leafy suburbs of Harborne and Edgbaston in the west.  This visit was the result of a competition win – a business card draw at an event they were hosting – no funny business, we all watched them draw my card out of the bowl of 50! 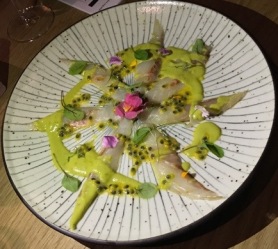 The bar, with its triple-height glazing, is a wonderful place for a Friday evening drink after work, watching the red brake lights of cars rushing home for some peace and quiet, and the white lights of cars rushing in to the city to get the weekend party started.  The interior lighting is subdued and the decoration chic.  The design is more restrained than theatrical, think bamboo and light woods, rather than geisha, with subtle detailing like polished concrete columns imprinted with a water design.

In the restaurant we had a table on the south side of the building, looking out to Edgbaston cricket ground.  The seating was comfortable and the service attentive.  As we were dining 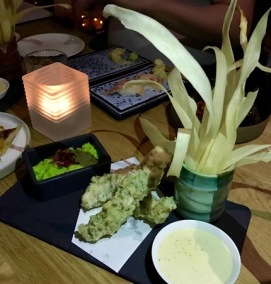 with two people with allergies (one shellfish, one gluten) we were given the allergen guide for the menu which was really helpful as we didn’t have to ask a thousand questions of the waiting staff about each dish.

The menu, which we hear will soon be expanding to include more pan-asian flavours rather than just Japanese, is pretty comprehensive.  They’re going for a ‘izakaya’ feel for the menu at the moment – for the uninitiated that’s sort-of Japanese tapas, lots of things to share.  There’s sushi, maki, sashimi, tempura, noodles, and quite a few “from the land” dishes for those who aren’t a fan of seafood (you weirdos), including the showstopping Wagyu beef steak.

The dishes were all beautifully presented, but the prettiest dish prize must go to the golden buttery scallops, served in shells with seaweed and flowers and black contrasting 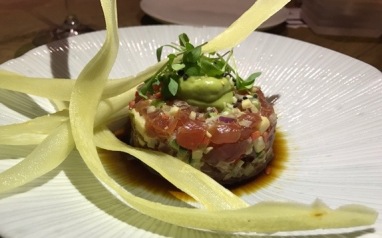 roe (caviar? I really must make more notes).  Actually, I think it has to share its prize with a sashimi dish of sea bass with passion fruit dressing, petals, and maybe a hint of Yuzu?  We also had some super fresh sushi, and a wonderful tuna tartare with a nose-tingling wasabi dressing, cassava crisps offering visual height and theatre, and a crisp edible spoon to set off the soft cool tuna.

I loved the soft and sticky pork ribs, and the steak was also great, served with lotus root crisps (not for the trypophobics amongst you).  The Japanese fish and chips was both entertaining and tasty.  The fish had a light crisp batter, the “chips” were cassava crisps, 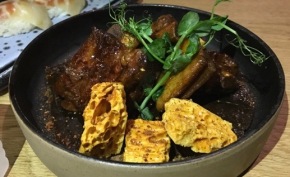 the mushy peas had a mild wasabi flavour, and it was served with a passion fruit tartar sauce – a great riff on the British classic.  We tried two of their desserts – a sharp lemon tart and a coconut panna cotta, both were good.

Dinner here is going to set you back £50+ a head depending on what you’re drinking.  The wine list is reasonable starting at about £23 a bottle for a tasty Viognier.  You could easily blow £100 a head if you were up for pre-drinks, sushi platters, mains, and cocktails.  Is it worth it?  The food is great, the place is beautiful, so in my opinion it is.  With recent staff and menu changes I’m sure it will continue to get busier.  Give it a go for that romantic dinner, or birthday lunch.  Kanpai! 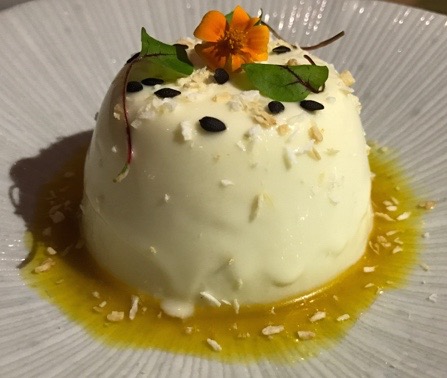 1 Response to Rofuto – a revisit