I like graffiti… but is it art? Let’s tour Brum’s Street Art!

Posted on September 4, 2018 by outinbrum 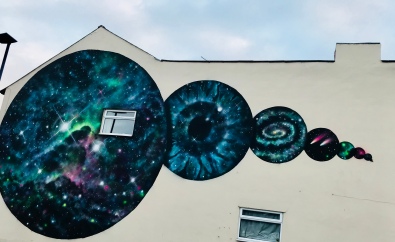 Graffiti – is it art?  Of course it is!  Our friend, and Birmingham grande dame of street art @yipski, has come in for some outrageous criticism for commissioning Bristol artist @cheba to paint a wonderful mural on the otherwise-dull side of her Harborne home.  We love it, and I’ve been entirely bemused by the mean-spirited responses it’s received on our community facebook page.  You can see for yourself here how beautiful it is, from this photo I’ve taken of it this week on its completion.  Also catch up with @yipski’s instagram to see her street art snaps from around the world.

Timely then it was to find out about a new Birmingham Graffiti self-guided walking tour route on “Run Walk Cycle Birmingham“, a free app available on Apple and Google Play

Ian’s plan is to release Walk Run Cycle city based apps around the world. Each city app will be free to download and feature the best curated selection of local walks, runs and cycles in each city.  Perfect for tourists wanting to see all the main sights, business visitors wanting to know a safe running route to take at night, or locals wanting to take the family out on the bikes.  Walk Run Cycle Birmingham has already achieved thousands of downloads only a few weeks after being launched.

The Birmingham Graffiti route is about 3 miles long, and will show you art from Birmingham based graffiti artists like Justin Sola, as well as international artists that created work for festivals in the city in years gone by.  Ian says it was one of the most fascinating tour routes he has worked on and was stunned by some of the artwork.  But don’t delay, graffiti art has a bad habit of disappearing when

new developments are built, so get out to view these now!  Ian went on to say “it’s such a shame so much of the graffiti art gets destroyed, but fortunately new works come along to replace them so I’ll be keeping my eyes open to alter and update the tour where necessary!”

As we head in to the autumn it seems like a great way to get out for an hour to take some air and some sunshine, and to stop by the many pubs and bars near the graffiti hotspots for a beer and a bite to eat.

(Photos of graffiti in screenshots courtesy of WalkRunCycle.com)