Sometimes I want white linen and fine glassware, but sometimes I want somewhere to watch the rugby with a pint and a pie. On those latter occasions, recently we’ve headed to Edmunds Lounge on the corner of Newhall Street and Edmund Street. It is what my dad would call a “boozer”. The regulars are stood at the bar with pints in hand, and loud drunken banter is usually the order of the night.  Don’t confuse it with fine dining establishment Edmunds in Brindley Place.

You might think that means the food might not be up to much – you’d be wrong. The 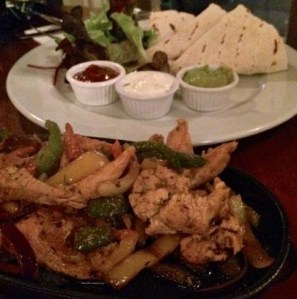 traditional pub grub served here is inexpensive and tasty, which isn’t surprising given that this is one of three linked venues that also do good food – you might know the other two, The Queens Arms, and The Rectory. We went along one Friday evening for a quick dinner with the mother-in-law, and found a table that was slightly quieter than the loud bar, there’s quite a bit of seating in the back room.

It may be a boozer but it is in the business district and the wine list is reflective of that. You can get a glass starting from £5 or a bottle from about £20. We had a £26 bottle of Paul Deloux Chablis, which was very nice.  They also have a cocktail menu.

We didn’t have starters although there are a few on the menu – garlic bread, calamari, southern fried chicken strips – mostly around the £5 mark. For my main I had the Fajitas. They’re self-assemble with the spiced meat, peppers, and onion being served on a sizzling

hot metal skillet. There was a lot of it, and it had good chilli heat. We tried the balti chicken pie, which had a good pastry case and a rich mild chicken balti centre. We also had the fish and chips, which has to be the bellwether of any eatery given it can be so wrong. Here it was very much right with thin crisp batter on the steamed fish within, the chips were also crisp on the outside and fluffy in the middle. All the mains are around the £10 mark. Nice to know they have a 5 star food hygiene rating from the scores on the doors too (info about there here).

Also for those of you out there who like a real ale they now have Cask Marque accreditation.

So if you fancy a beer and a pie, give it a go.  Check them out on twitter for details of their Thursday night live music http://twitter.com/edmundslounge.