Opposite St. Phillips cathedral The Old Joint Stock pub takes prime position in an imposing Grade II listed building built in 1862.  Originally designed as a library, it was used as a bank until converted to a pub and hundred seat theatre (yes, theatre, bet you didn’t know that) in 1997.  The interior is grand: a balcony overlooks the triple height drinking space with beautiful bar floodlit by an impressive glass dome above, that lights crimson and gold wall coverings, carpets, artwork, dark wooden furniture, and period features.

The bars around the Colmore Business District seem to go one way or the other: there are a few boozers such as Edmunds Lounge and The Old Contemptibles, and there are upmarket dining and drinking establishments like 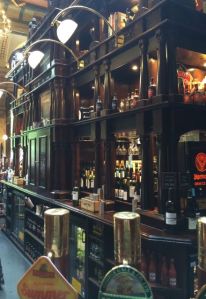 Bureau, Pure, Metro, and Opus.  I can personally vouch for all of those listed.  The Old Joint Stock may be grand, but it isn’t fancy, this one is definitely on the “boozer” end of the scale.  You won’t be coming here after Fumo or Gingers for another cocktail served in a hipster jam jar – it’s pint and pie territory, in fact they sell more London Pride than any other venue in the UK.  We went to check out their Sunday lunch a couple of weeks’ ago.

We tried the Roast Chicken which was served with all of the normal accoutrements: roast spuds, green beans, Yorkshire pudding, cauliflower, broccoli, gravy.  I thought the chicken was a touch on the dry side, and the spuds were a little over done.  Nevertheless it was tasty.  The roast Sunday lunches start at about £11 for one course or £14 for two courses.  We had the Eton Mess as dessert which was plentiful and well prepared, although it would’ve been better served in a glass rather than slopped on a plate. 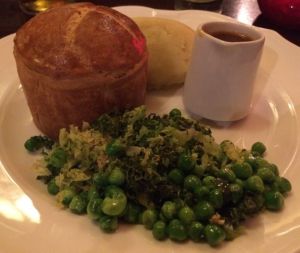 I had the chicken and chorizo pie (£13), and think it was much more successful than the Sunday lunch.  It was served with peas, cabbage, a jug of gravy, and lovely mashed potato that was well seasoned with white pepper.  The pastry was a little overworked so perhaps harder than it might’ve been, but I suspect it needs to be as they’re served as attractive slender pies, and it was very full of lovely chicken in a chorizo gravy.  There wasn’t much Chorizo in evidence but the flavour was good.  The food isn’t outstanding but it’s good enough for a feed while you’re out drinking or pottering around town.  Sometimes I want a good pie and a pint, and that’s when I’d come back here.

I mentioned earlier that there is a small theatre upstairs.  It shows some random acts – 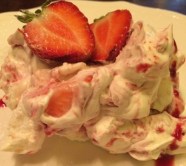 from comedy stand-up (including fabulously funny Brummy Aaron Twitchen) to straight plays.  Tickets are rarely more than about £12.  We’ve seen the fantastic Barbara Nice there (she got us all Bollywood dancing), and in October there’s a show called “Einstein: Relatively Speaking” which sounds hilarious, and apparently it “features the wurst sausage joke ever”.  Tickets for that are just £10.

A lacklustre performance on the food front but overall a nice venue.