UPDATE FEB ’16: We’ve since been back to this restaurant and it was much better. No missing about with the counters, staff were friendly and new what they were doing.  Original review below…

Being one of the UK’s most landlocked cities, Birmingham was never going to be a pescetarian’s playground.  Yes there are restaurants with a few good fish dishes (I’m told San Carlo is the best, and the fish offerings at Côte and Andersons are always good), but no “fish restaurant” per se.  Enter Le Monde Fish Bar & Grill.  A stalwart of the Cardiff dining scene the Birmingham branch has opened, after a delay of a couple of months, above Café Rouge in Brindley Place.  We visited in the opening week to celebrate finally exchanging on our new Harborne home.

The entrances are a little hidden, so do pay attention if you’re trying to find it.  There’s one

on just either side of Café Rouge, both having steps to the upstairs restaurant (one with disabled access lift).  Inside it’s a bit of a hodge podge of styles.  Reproduction Victorian furniture jars against modern chandeliers and glass cabinets, à la supermarket butchers and fish mongers, that brim with poultry, steaks, whole fish, lobster, and crevettes – a cornucopia of goodies for any gourmand.

It was rather loud when we were there, a crooner with guitarist giving us Nat King Cole and Andy Williams, but in the low ceilinged restaurant it was just a bit too loud for comfort, and we found ourselves shouting over the background music.  We chose a seat at the back, away from the entertainment.  Then comes the lesson.  We were shown the menus, and told that we could order from the menu at the table but we should definitely go and look at the contents of the fresh meat and fish counters and order from the waiter there by pointing at what we wanted.  It’s unusual in UK restaurants that one is confronted with the flesh that 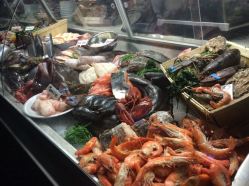 will soon become dinner, and it’s not for the faint of heart.  After perusing the aisle, I decided I’d choose from the menu.  I went to a steak house in San Francisco once where the waiter took great delight in producing great slabs of steaks on plates to explain what we could order, and promptly to his disgust I ordered the fish.

We ordered a bottle of Gavi to be getting on with which arrived a little warm, so we asked for an ice bucket to chill it down a little more, which was duly provided.  One hopes the wine waiter doesn’t have a penchant for serving whites at the temperature they like them rather than at the temperature I like them (which is probably a bit warmer than most anyway, due to having Phil at Loki frequently telling me that “people drink whites too cold”).

For starters I had the scallop (with roe, which is unusual) and prawn skewers, it was nice

and had a good char-grilled flavour.  Could’ve done with more than the dribble of sauce it was served with, and the lemon should have been de-pipped or served in a muslin square.  We also had the calamari which was a little on the chewier side of cooked than it could have been, we did mention that and it was taken off the bill.

For mains I tried the tuna steak with new potatoes.  Again this was well char-grilled and
served perfectly rare, but again the promised béarnaise sauce was rather meagre in quantity.  We also had the fillet steak which was juicy (although maybe a touch over the 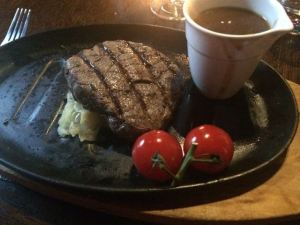 medium-rare we’d ordered), served on softened onions, with a pot of red wine and mushroom sauce, and excellent (really!) chips. We also had a side of brocolli with toasted sliced almonds.  Note that most of the dishes are just portions of fish or meat, so you’ll generally need to order veg, spuds, and sauces separately.  To finish we tried the ginger and lemon cheesecake for desert and it was very good indeed, light but fiery ginger working with the tangy lemon.

Service was reasonably swift and very polite, although we did have six different waiting staff attend our table throughout, and invariably that meant there were a couple of mix-ups which then had to be sorted out.

After dinner we retired to the separate lounge bar to have cocktails.  I was going to have a
Negroni but they had no Campari, not to worry though because the skilled cocktail waiter made me an Aperol variant of it which was delicious.

With starters, mains, sauces, sides, an average bottle of wine, and dessert, the bill was about £55 a head.  Plus £10 each cocktail.  It is upper end but if I’m honest we had a bit of a mediocre experience when we went.  Bear in mind it had only been open 5 days so it hadn’t had time to bed in really.  We will no doubt be back in a couple of months when everyone’s had a chance to learn their role and understand how the restaurant is going to work.  Good luck to the team there, they obviously have lofty ambitions and with a few tweaks and some time, I’m sure they’ll make it into a fine addition to Birmingham’s ever growing dining scene.