If you haven’t heard of Chefs Mike Bullard and Jamie Desogus then you’re not paying enough attention to the goings-on of the Brummy food scene.  As well as bringing you fine dining Pop-Up restaurant The Harborne Kitchen, which is intended as a launch pad for their own full time fine dining restaurant and to develop their menus, the pair have also given you the too cool for school Butcher’s Social in Harborne High Street, a temporary bar and restaurant which they plan to keep open until later in the year.  They’ve got lots of clandestine plans in hand so follow them on twitter to stay abreast of developments.  We attended their Harborne Kitchen pop-up at 6/8 Cafe at Millennium Point on 29th May to sample their widely applauded menus.

The format for the evening was a fixed seven course menu (£45) with a matching wine flight (£25).  Seated canteen style (i.e. sharing large tables with other diners) we kicked off with a Langley’s gin and tonic with pomegranate.  I was seated by kickboxing Brian from Ireland, and we were both wearing the exact same distinctive shirt (it could have been awkward but we both thought it was hilarious that we shared such good taste).

I don’t usually list out everything we eat but it was all so good I think I have to, so here goes, take a breath…

First a note on the wine (and beer) matching – it was excellent.  I’ve done wine flights with lots of meals and invariably we end up with one or two that I think don’t match, or are cheapies the restaurant wants to get rid of.  Not so with this, matching.  Of particular note for me was the pungent Malbec Nieto Senetiner 2012 which I thought was much too big to match with anything – however it was perfect for the umami hit of the beef faggots, that was my top match of the night I think.  The other stunner was the Elysium Black Muscat, which oozed masses of lychee that added to the dish of deconstructed Black Forest Gateaux.  The matching of Saddlers Red IPA to the pork was also inspired – long dinners with lots of wines can get a bit heavy, and the IPA brought a lightness that complimented the simply roasted and oh so succulent pork belly which was also served with a purée of black garlic.

The white and green asparagus was served with chickeny Hen of the Woods mushroom making the veggie dish actually taste quite meaty and the Rustenberg Sauvignon Blanc 2011 with notes of asparagus and gooseberries was a great pairing.

I’ve mentioned the second pudding, an excellent deconstructed Black Forest Gateaux with tart black fruit sorbet and a perfectly gooey chocolate fondant, but the first pudding of yoghurt sorbet was equally as good with the corriander leaves adding an unusual flavour.

The menu could only be described as accomplished, and the pairings of wine and beer inspired.  Simply, I loved it, and I look forward to seeing what else Mike and Jamie bring to the city’s dining scene – it’s bound to be excellent.

More pop-ups are planned and you can find the details on the website here: Harborne Kitchen Website. 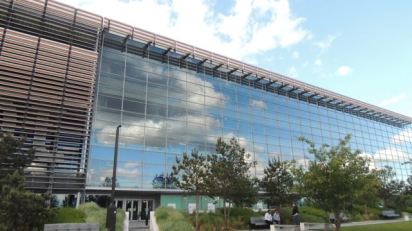