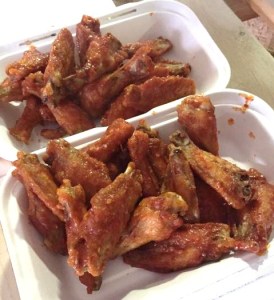 It would appear to have escaped the attention of many people that The Butchers Social, on Harborne High Street, closes on New Year’s Eve. The pop-up venture that was opened by chefs Jamie Desogus and Mike Bullard initially for just one night back in March, caused such a stir that the venue has remained open ever since. As I live just a ten minutes’ walk away from it, its closure is coming as quite a blow, I have definitely drank the koolaid and become part of its cult following.

Why would they close such a successful venue you ask? It was always Jamie’s and Mike’s intention to dramatically transform the old Walter Smith’s butchers shop in to “Harborne Kitchen”, a restaurant that will focus on innovative British dishes, and that has been operating as a pop-up in various locations for a year or so. In fact we’ve already reviewed one of their pop-up nights and you can take a look at the kind of excellent food and experience they’ll be offering on our review here. 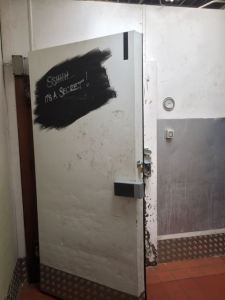 The builders will be moving in on 2nd January, and while the regulars will no doubt be disappointed at the demise of The Butchers, the team are currently on the look-out to find alternative premises in South Birmingham, or possibly the city centre, so the Butchers brand can live on. “It took us a week to transform the Butchers and we can do it again,” said Mike. “We are looking for somewhere that we can quickly take over and get up and running by February.” If you know of any locations that might be right, tweet the guys @ButchersSocial .

With the understanding that when good venues come along you have to jump on them, the chefs took over the butchers shop knowing they’d have many months with it empty before their plans for Harborne Kitchen were ready to proceed. Faced with those months of 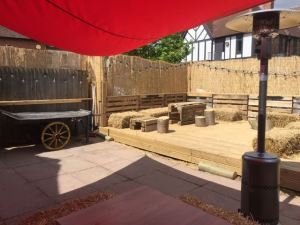 waiting due to planning issues, they decided to clean up the premises and with just a makeshift bar and some borrowed speakers, opened up for one night only in March. ‘We didn’t know if it was going to work, or if anyone was going to turn up,” said Jamie. “But people were queuing out the door.”

The success of that first night, and with a growing fan-base on two subsequent weekends, Mike and Jamie took the risky step of quitting their jobs and running the Butchers full-time, transforming it with pallet tables, a marquee area outside and some bespoke graffiti but with a nod to its meaty past by retaining the wall tiles and using the old fridge as a walkway. They’ve gained a reputation for producing a constantly evolving menu, inspired by often-overlooked ingredients, and a range of great local beers. Chicken wings with flavours including salted 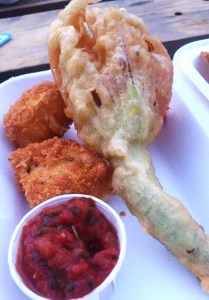 While Jamie is looking forward to getting the new restaurant started in 2016, for now they are concentrating on the final days of the Butchers Social. Christmas Eve will see Brummie musician Simon Boswell return for a gig, and tickets for the closing bash on New Year’s Eve are selling fast. At £35 a pop and with unlimited chicken wings, it’s sure to be the perfect way to bow out after a rather exciting year.

“The Butchers Social has continued to evolve since we started it in March and we’re grateful for all the support from our customers,’ said Jamie. “2016 is going to be a huge year for us,” added Mike. “We’re looking forward to opening the Harborne Kitchen and for people to find out for themselves what it’s all about.”

p.s. Grammar Nazis – Don’t bother tweeting me about the lack of apostrophe in “The Butcher’s Social”, it appears to be something of an in joke with the team, I’ve also see them style it “Butcher’s” and “Butchers’”! It makes me twitch every time I see it!