The Original Patty Men, or OPM to the initiated, have made frequent appearances at Birmingham’s street food events like Digbeth Dining Club for a couple of years, and invariably their stall would serve crowds of hungry people who’ve waited all week to get their hands on one of OPM’s deliciously filthy burgers. I don’t think you can call yourself a serious burger fan until you’ve had Big Vern’s Krispy Ring, which must be a thousand or so calories of Krispy Kreme doughnut sliced and sandwiched with their signature seasoned 35 day aged longhorn beef meat patties, maple cured bacon, and cheese.

We love Brum’s street food scene but we sometimes fancy an amazing burger when there’s no street food available. Brilliantly for Brum and those people who like a nice sit down, OPM have solved that by opening their own restaurant a stone’s throw from Selfridges in the city centre, in partnership with Siren Craft Brew.  OPM have come a long way in a short time, as Chefs Scott O’Byrne and Tom Maher

started with no experience in the kitchen, but a background in design which is evident in the branding.

Although in distance it’s only maybe two-hundred metres from the staff door of Selfridges, the area it’s in is really rather down-at-heel. To find it you’ll need to walk down the hill beside Moor Street train station, turn left under the dark dank railway bridge, then take the first right down Shaw’s Passage opposite Taboo sex cinema, and it’s in one of the railway bridge arches on the right hand side before the closed internet café. Just around the corner from vegetarian Warehouse Café. There’s ticket parking on the street should you wish to drive, and of course Moor Street Car Park is just two minutes away. Digbeth and Eastside have not managed to capitalise on the second city’s

dining transformation and success over the past decade, but I hope that interesting independents like OPM, Digbeth Dining Club at Spotlight, The Karczma, and the popular Rico Libre tapas restaurant, will start to take advantage of the much more reasonable rents and rejuvenate the area. Landlords in the city centre would rather their properties remain empty while they wait for the big chains to spend mega bucks, than nurture an up and coming business.

The interior is functional and well styled. Spray paint art of a cow in the style of an Immaculate Heart of Mary painting, with the heart replaced by a burger, adorns one wall. The activities of the kitchen are clearly visible from the tables and the waiting staff flit around efficiently. On a Saturday 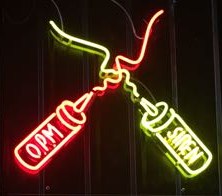 lunch time there were tables available when we went in but all of them were full by the time we left. They’ve got two railway arches and I hope that in the summer the right hand one, which is where you’ll enter the restaurant from, will have outdoor seating.

All the draft beers from Siren were extremely hoppy, which I’m not a fan of, so I opted for a tin of Anchor lager which was good. There seems to be a bit of a thing for overly hopped beer at the moment so I know it will suit the crowd even though it doesn’t suit me. While we contemplated the menu the sound of trains passing overhead 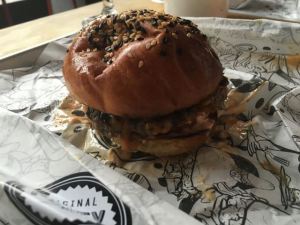 quietly reverberated around the cosy venue. We opted for the O.D.B. triple cooked skin on fries which come loaded with spice mix, jalapeño slaw, mayo, crispy onion, and spring onions. We also had some of the tasty slow cooked barbecue beans. The sides were really good. For my burger I chose Darron’s Fancy – beef patty, sriracha (chilli) mayo, ripe tomato, strong red Leicester cheese, and crushed pork scratchings, in a sesame bun. It was unctuous and hearty, and the first bite caused a rivulet of meat and cheese juice to run down my hand to my wrist, a sure sign of a good quality filthy burger. We also had the Bacon Cheese burger, with sweet bacon and fairly heavy on the mustard, it was also very tasty.

For research purposes we shared a slice of Kit Kat brownie, the sweets are brought in from

Kimmy Loves Cake, who had been highly recommended, and rightly so. The brownie had a perfect balance between cocoa and sugar, not too sweet, and with a cool velvety mouthfeel.

For two burgers, fries, beans, two beers, and a brownie, our filling lunch came to a modest £30. The service was great, the food excellent, and the vibe cool but not try-too-hard. I suspect when word gets around, you’ll be fighting for a table hear, so get in early to avoid the rush is my advice. 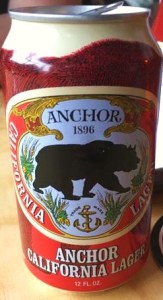