As we’ve just about recovered from the hangover, we thought we better pen some thanks to everyone who made last Sunday’s black tie charity dinner at The Butlers Arms such a success, raising over £5,000 for Birmingham charities supported by Rotary Club of Erdington, including BurnAid, Enzo’s Friends, and RSVP.

Nathan Eades, Head Chef of Michelin starred Simpsons restaurant, provided his services to cook the six course feast: Red Matcha amuse bouche, pig head terrine, tuna tartare, roast chicken, ‘cheese on toast’, and ‘strawberries and cream’.  Chef Eades was ably assisted in the kitchen by The Butler’s Arm proprietor-chef, Paula Giles.  Paula, husband Chris Giles, and daughter Becki Giles provided the venue and most of the practical organisation for the day (including humping around the furniture at 2am).  The event was compèred by the inimitable Keith Ward of The Station Pub in Sutton.

And now thanks for the myriad kind donations:

Thanks to the other half of Out In Brum for running around for prizes, and for Russell Printers for providing free printing for the event.  Deals were done by the suppliers to reduce costs, so thanks also go to: Steve at SDS Produce, Keith Smith of Caterfish (both in the wholesale market), Russell at Russell’s Butchers in Shenstone, and finally Matthew & Vanessa Perkins, at Perkins Wine Traders (who I’d like to personally thank for my hangover).

In the spirit of Rotary Club style minutes, GTHBA (Good Time Had By All). 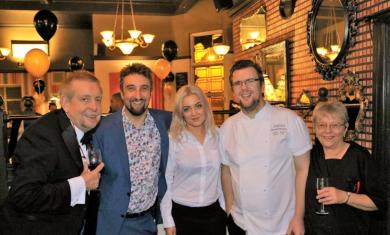 Find out where to eat, drink, and be merry in Brum.
View all posts by outinbrum →
This entry was posted in Special Event and tagged Birmingham Charity Event. Bookmark the permalink.