After almost a year of mourning the closure of The Butchers’ Social on Harborne High Street, Wednesday night we were able to celebrate the opening of its replacement – Harborne Kitchen.  Co-creator of The Butchers’ Social, Jamie Desogus, is now Executive Chef Proprietor of his very own restaurant, an elegant and friendly place that is going to tickle the taste buds of most of Brum’s foodie set over the coming weeks.

Those of you who knew The Butchers’ won’t recognise the place, for it has quite literally been rebuilt.  The only things that remain are the party walls and the roof.  A palette of

deep blues and beech woods offer a warm Scandi vibe, with a massive hand painted bull alluding to its decades as a high street butcher’s shop.  Entering from the street you’ll find yourself in a cosy bar inviting you to take a seat and have a coffee from local roastery Quarter Horse, or indulge in a beer, a wine, or a well-made cocktail from Josh.  As an aperitif we had an excellent espresso martini, combining the wonderful Quarter Horse coffee with Josh’s skills with a cocktail shaker.

It’s often said that the British hospitality industry is run by the most inhospitable people, but it’s not so here.  Like many of the HK team, bar manager Josh is full of boundless

energy for his profession, and the service from him, the general manager Kinglsey, and restaurant manager Ben was remarkably good.  All of the staff are proud of the transformation of the building, and of the fine product that they’re offering.  The kitchen team, entirely on display in what must be the most open of kitchens in Birmingham, are equally buoyant to be dishing out top quality food, and there is some established young talent on display alongside seasoned Chef Jamie who’s worked for some of the UK’s finest chef’s such as Gordon Ramsay and Mark Askew.

Full disclosure: we went to a soft launch night so food was half price, if you think that’s swayed my point of view, it’s because you haven’t tried for yourself the roasted yeast butter, the cod skin “quavers”, nor the pork doughnut.  I have no doubt you’ll be as big a fan as I am.

We booked seats on one of the two chef’s tables, sat on high stools against a generous bar overlooking the completely open kitchen.  I find it fascinating to watch an expert at work

and was not disappointed as we had a great view of all the kitchen stations.  HK offers an à la carte menu (two courses £26.50, three courses £32.50), but as it was a special occasion – a miserable and wet Wednesday in November – we thought the seven course tasting menu (£55), with matching wine flight (£40), was in order.

First up, chef’s snack.  A golden golf-ball sized doughnut filled with pork collar and topped with sharp apple sauce, hot from the fryer, was a perfectly piggy antidote to the winter gloom.  The cod skin ‘quavers’ were feather light and delicate, and with a spray of rosemary vinegar gave a big flavour punch and a taste of the sea.  The accompanying bread, baked on the premises of course, was served with an

unusual roasted yeast butter, adding a strong sesame flavour with a hint of malt.  I finished the lot.  This was served with an English sparking wine that I’d not had before from Bolney in Sussex, a light and simple wine, quite fizzy, cut through the richness of the doughnut; it’s always nice to start with some fizz.

The first starter course was Jerusalem artichoke, girolle, spinach, camembert, and hazlenut.  The artichoke was burnished gold in butter and married beautifully with the creamy camembert foam.  Artichoke crisps added another texture, with hazelnut brittle as a 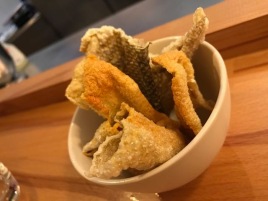 seasoning.  This was served with a Navaherros Blanco de Bernableva which was minerally with a  creamy mouthfeel.

The next starter course was lamb sweetbread, pink peppercorn, coriander, masala shrimp, and cauliflower.  This small dish packed a mighty fine taste profile.  Some hung yoghurt was slightly sharp against the soft sweetbreads, while the masala shrimp brought in a more exotic warmth and strands of sour apple cut through the butteryness.  This was served with the cold hopped house lager, closer to an ale than a continental lager, this has the hops thrown in at the last minute for a floral hoppy flavour, but without the extreme bitterness favoured by many craft brewers, a lovely well balanced brew.

Then on to a fish course.  Monkfish, leek, pig’s ear, rosemary, and almond.  The shredded

fried ear was salty and crisp, great contrasted with the firm white monk fish and soft leeks.  Unusually this was served with a red wine, a Lagrimas de Garnacha.  I was quite ready to dislike this pairing but found I couldn’t, the wine was light and the dish was rich with the meaty monk fish and the salty piggy ear, and the match worked well.

Next up the main.  Fallow deer haunch, hispi cabbage, celeriac, coffee and chocolate.  The celeriac puree was sweet against the slightly bitter cabbage, and pink venison.  I love how chocolate and coffee are being incorporated in to more savoury dishes, and the team here shows perfect restraint in their use.  There

was just a mere suggestion of them both, adding a wonderful depth to the venison flavours.  The wine with this course was my favourite, a gorgeous jammy St Emillion Grand Cru Bordeaux, full of autumnal blackberry.

On to a pre-dessert of sharp yoghurt, sweet dehydrated Clementine, and star anise.  I enjoyed the punchy aniseed against the cool yoghurt and, and the aniseedy fennel fronds.  This was served with a Niizawa Earl Grey Sake, sweet and bergamot perfumed.  Finally, on to the final dessert: mango, ginger, buttermilk, and macadamia.  The ginger sponge was delicately spiced to work with the sunny mango.  The sugared macadamia was pretty and provided

some required crunch; I had earlier enjoyed watching the burly pastry chef make these dainty shining jewels from molten sugar.  The final pairing was a Royal Tokaji, a familiar delicious dessert wine.

As a digestif Josh produced for me a great rendition of an Old Fashioned, which I enjoyed with the mignardises of blackberry pastilles.

Definitely a marathon and not a sprint, we were dining for around four hours, with service being spot-on, neither slow nor impatient.

I suspect that this place will be packed pretty soon, the service and food is simply too good to pass up, and it promises to offer a lot of possibilities – pints, cocktails, bar food, celebratory dinners, romantic meals, coffee, and everything in between.

Congratulations Jamie and the rest of the team in opening a top class local restaurant, and good luck over the coming months while you become an established part of Brum’s exploding dining scene.

Check out this time lapse of the kitchen and some more snaps below: