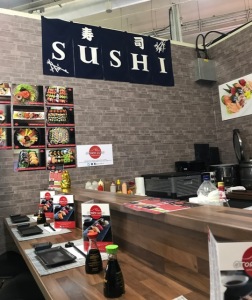 I’ll forgive you that Birmingham may not be your immediate thought when you think about Sushi.  Perhaps your mind wanders to images of naked Japanese maidens decorated with crustaceans, rice, and tuna (that’s called Nyotaimori and there’s an interesting article about it available here).  It’s no surprise your brain doesn’t leap to Brum given it is as far from the sea as it’s possible to be in the UK, yet I’m hoping my review of Otoro will urge you to give seafood more of a chance.

The meat and fish market next to Brum’s well-known Rag Market is home to a six-stool Japanese style sushi bar, that goes by the name of Otoro, a word that refers to the fattiest part of a tuna fish.  The sushi bar has been open for a while and has developed somewhat of a cult reputation, partly for the wonderful food, partly for the unusual location. 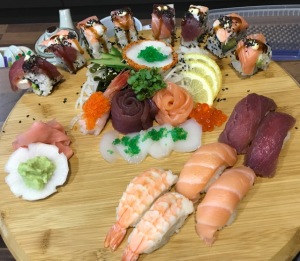 On entering the market there is a noticeable fishy note to the air from the many stalls selling a grand array of fish and seafood.  The market is worth a visit for the best fish in town and the many knowledgable fishmongers will help you select fish, completely prep it for you, and even advise on how to cook it.  I wasn’t there for the shopping though, I was just nipping in to Otoro with two colleagues for a swift Friday lunch, rather than my normal weekday lunch which I generally eat al desko.

Sushi here can be ordered by the piece, by sets, and by platters.  A ten piece set costs from about £13.  We plumped for a £45 platter between the three of us, including: 8 tuna and salmon California rolls; 6 tuna, salmon, and king prawn nigiri; 4 sweet raw prawns; a load of tuna and salmon sashimi shaped in to flowers; raw thinly sliced scallop (I’m told these are rarely available around Brum); fish roe; and accompaniments (wasabi, lemon, seaweed, and radish).  We also had the Dragon Rolls – California rolls stuffed with tempura prawns and wrapped with avocado and cooked eel.

Chef recommended the Dragon Rolls.  We were trying to order something else but he

pretty much insisted!  He’s a bit of a character and has a reputation for upsetting his guests both here and at Sushi Passion where he used to work.  I like my chefs temperamental so it worked for me, and frankly I’ll put up with a lot when chef turns out tasty morsels like these.

I’ve not had the sweet prawns before and they were soft and delicious, and the raw sliced scallop was tender and sweet.  California rolls were packed well enough for chopstick eating (no one wants to be dropping half of one whilst taking a bite).  The Dragon Rolls were a real favourite, with great textural difference between the tempura prawn, rice, eel, and avocado.  By the time we ate all of it, we were pleasantly full and in need of a carb come down nap.

My colleague who is a massive sushi buff thought it all very good, his only slight criticism was that the nigiri rice was “a little bit too compacted”.  I didn’t share his opinion, but that’s possibly because I know so little about sushi other than that I like it.

Otoro offer outside catering for your parties and office buffets or parties at home, it’s the prettiest party food going in my opinion and sushi chefs seem to be part chef part artist – who needs a sea of beige when you can have a cornucopia of fishes and shell food.  You can stop by for takeaway, or order it on Deliveroo if you live close enough and can’t be bothered getting off the sofa.

My colleagues and I loved the place and will definitely be back.  Give it a go.