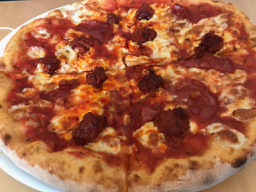 Dichotomy of architectural style is apparent all over Birmingham, and nowhere more so than the Jewellery Quarter.  Hideous 90s blocks of flats and offices sit side by side with beautiful Victorian temples to manufacturing, some of which have undergone chic refurbishments, repurposed to service the bustling village community that’s been built there.  And so to Caroline Street, just off St. Paul’s Square, where a building that used to house part of the biscuit factory has been turned in to The Eight Foot Grocer and deli (built in the factory’s 8 foot wide loading bay), and Otto Wood Fired Pizza restaurant.  A former London restaurant manager, Chris James, is behind both ventures.

Although I’ve heard it’s great, I can’t comment on the grocer’s (see what I did there grammar nerds?) as I’m never around when it’s open to try the produce, coffee, and lunches that they offer daily.  I can however comment on the pizza as we’ve eaten there a couple of times now.

The last time was a summer’s Friday evening a few weeks ago.  Straight from work we

headed to the brilliant Rock ’n’ Roll Brewhouse for a couple, and then over to Otto’s.  We sat out on a pavement table with a bottle of beer in some rare 2017 sunshine, looking over at the gold trimmed Bloc hotel.  I’ve just noticed on the menu that I could’ve ordered a pre-dinner Negroni or Aperol Spritz, I shall give them a go next time.

This place is about provenance of ingredients.  Coffee comes from Birmingham’s Quarter Horse Roastery, flour from the Cotswolds, salami from Shropshire, and the blue cheese is Colston Bassett.  There’s nowhere to hide on a pizza, the ingredients and their quality must speak for themselves.

There are eight pizzas on the menu, and usually a couple of specials.  It goes without saying that they make their own dough, and have a fiercely hot pizza oven to cook the pizzas in.  I chose the ‘Nduja, mushroom, mozzarella, tomato, and I think it was drizzled with honey (I failed to get a copy of the specials menu).  Sweet honey complimented the the spicy heat of the soft ‘Nduja sausage which packed great flavour.  The base of the pizza was thin and crispy. I loved it, and I think it’s one of the best pizzas I’ve had in Brum.  We also had a pizza with a white sauce base instead of tomato, perfect for tomato haters.

Pizzas will cost you less than a tenner here and they’re made with real care and attention.  The food was great and the service was friendly, I’d highly recommend it.