With the number of UK restaurants going bust up by a fifth in 2017 and the middle of the road fast-casual chains struggling with the likes of Byron, Jamie’s, Prezzo, and Carluccio’s closing venues left right and centre, now more than ever this category needs to evolve and offer something different to attract more diners and survive.

One of these chains may well have come up with a bright idea by looking back to its roots.

Let’s clear one thing up right away. I’m not about to say Pizza Express is going to be the best meal or even pizza you have had, nor that you can get in Birmingham (you have to go to Otto’s Pizza for that). This is about the overall Live Entertainment experience which is reasonably new at Pizza Express Live in the Brindley Place venue.

Founded in 1965 by Peter Boizot, PizzaExpress opened its first restaurant in London’s Wardour Street. Inspired by a trip to Italy, Boizot brought back to London a pizza oven from Naples and a chef from Sicily. This was quickly added to in 1969 with jazz performances beginning at its Dean Street restaurant in London. 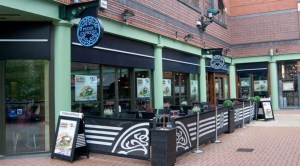 Now, with an eye to the past on how to stand out from the busy high street crowds, they have extended the live music offering outside London to include Maidstone, and most recently Birmingham.

We have now been to two shows at the Brindley Place restaurant, and have had fantastic nights out on both occasions. The shows in Birmingham tend to be Wednesdays, Saturdays and Sundays with show times around 8 to 8.3o p.m. 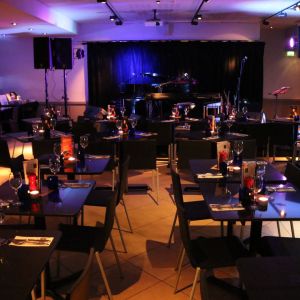 and take your table for the night. This is yours until the end of the night. We have aimed to arrive around an hour before the show time to order food from the full Pizza Express menu  which usually means we have finished eating just before the show starts (during some shows food service is restricted) though table service does continue during the evening.

Our first visit was a jazz music night.  With it being December and me loving the whole festive season, we plumped for Ian Shaw who is a Welsh borne jazz singer, record producer and a bit of a comedian all rolled in to one. His ‘Shaw Shimmers into Xmas’ show which was touring the UK at the time was mellow and very funny.  He explored the joys, tears, and sometimes shear horrors of the festive season. We left at the end of the night vowing to find another show to return to ASAP in the new year.

After a cancellation bought about by the snow in early March, we made it back to a 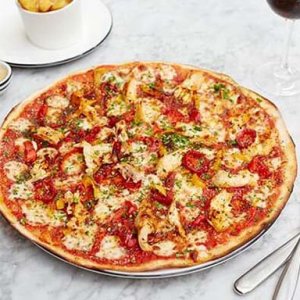 rescheduled West End Night Off in late April with friends. Having not told them much about the format or the show, we again arrived an hour before the show for pizza and wine. I must admit I actually thoroughly enjoyed my Pollo Forza pizza – chicken with smoked chilli, garlic oil and dried chilli flakes with red & yellow peppers, Roquito pepper, mozzarella and tomato, finished with Gran Milano cheese, fresh parsley and chilli oil on their thinner and crispier Romana base (I am always a thin pizza base kind of guy).

The show turned out to be a surprise to all four of us as it didn’t follow the format we had expected. We had all, incorrectly, assumed the show would be the classics from all of the top West End shows that we all know and love. In fact the name should have been more of a clue than we took from it. Yes the singers taking part came from some of the West End’s top shows including Cats, Wicked, Avenue Q, Little Shop of Horrors, We Will Rock You, Les Miserables, Phantom of the Opera and more, but as the name suggested this was their night off.

Therefore what we settled down and enjoyed was an intimate rendition of some of their favourite, and often less well known songs from a broad mixture of shows. This was interspersed with anecdotes and stories of “worst audition experience”, “most embarrassing moment on stage” (an over-zealous entry resulting in the lead ending up sprawled on the netting over the orchestra pit in front of the stage) general banter and chat between the songs.

Is this the best pizza or pasts in Birmingham?  No it isn’t.  Is this a good, fun night out, with tasty inexpensive food, either as a romantic date night or as a group of friends?  Yes it most definitely is.

To find out what shows are coming to Birmingham and to book, you can go to the website here: https://www.pizzaexpresslive.com/venues/pizzaexpress-live-birmingham